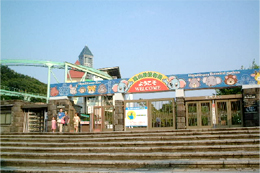 Notable for its 10 to 15 minute subway ride into the city center, and easy commuting access to Toyota City, Chikusa Ku (ward) is far enough away from downtown that the urban feel begins to wear off and green areas attempt to retake the pavement making it a popular choice of neighborhood for families.  Such proximity to the city’s hustle and bustle however, means that Western style housing is limited; however Japanese style apartments that are modern and well-designed. Fortunately the closeness to the vast Higashiyama Park, which includes the Nagoya Zoo and Botanical Gardens, gives residents a decent respite from the clang and bang of downtown.

The predominate subway line serving the area is the Higashiyama Subway line, which traverses the city from Nagoya Station all the way east to Fujigaoka. It is intersected at Motoyama by the Meijo line which loops around the city and connects to most of the city’s subway lines at some point. Once you hit the less desirable Imaike Station, which connects to the Sakura-dori line, you are, for all intents and purposes, back in the city.

At Chikusa station, the Higashiyama line connects to the JR rail line which serves Nagoya Station, Kanayama and Tsurumai as well as points farther from town.

There are plenty of beautiful open green spaces in Chikusa ward, one of the most popular of which is Heiwa Park. Beautiful all year round, it is one of the city’s top choices for viewing both cherry blossom in springtime, and the red maple leaves in autumn. In the area of Higashiyama you can find the Higashiyama Botanical Gardens with around 5,500 species of plant. In the north of Chikusa ward you can stroll amongst the hydrangeas of Chayasanga Park and in the far western tip can find Fukiage Park. Just outside of Chikusa’s western border is Tsurama Park, another popular though somewhat more raucous destination for cherry blossom viewing at hanami time.

There is plenty of shopping available in the Chikusa area. The eastern end towards Hoshigaoka and Motoyama has the upmarket department stores of Mitsukoshi, Hoshigaoka Terrace and Matsuzakaya, the HALLO 2 International supermarket in Higashiyama Koen and Seijo Ishii in Ikeshita stocks extensive ranges of imported foods for when you crave a taste of home. . Around the Chikusa station area you can find many shopping opportunities. Between the 100 Yen Daiso stores, the low-cost catch-all Don Quijote, and the Aeon Shopping Centre, most requirements are catered for. Once a month the area of Kakuozan has a small festival at which one can find handicrafts and boutique clothing.

While most restaurants are focused around the Chikusa, Imaike, Fukiage and Hoshigaoka stations, you’re never far from a dining option in Chikusa, particularly if you are along the Route 60 road that follows the Higashiyama subway line. While you can of course find many older style ‘izakaya’ restaurants, there are many European style restaurants and bars, popular with the affluent locals. If you are missing western fast food, the Chikusa Aeon mall has the only Burger King in the city.

Chikusa ward is not known for its nightlife. It is, however, closely connected to the party areas of Shin Sakae and Sakae which are a mere 5 minutes away on the subway. If you do want a quieter night out there are many nice café bars to enjoy, particularly in the spring and autumn months when it is pleasant to sit outside of them. Around the Imaike station area there are a few live houses that showcase local bands and artists, and towards Tsuramai you can find Live House K.D. Japon that occasionally sees international artists perform.

While Chikusa ward’s nightlife is less raucous than its neighboring areas, it does have plenty to do for the family. The most popular activity is the Higashiyama Zoo and Botanical Gardens that houses more than 125 species of mammals, plus many more besides. It is the second most visited zoo in Japan, behind Ueno Zoo in Tokyo. Next to the zoo is the 100m tall Higashiyama Sky Tower with observation decks affording great views of the city. Chikusa ward is home to important shrines and temples such as the Shiroyama Hachimangū shinto shrine in Motoyama that hosts nighttime dancing festivals twice a year, the five century old Tōgan-ji Buddhist temple built to honour the great Japanese leader Oda Nobunaga and the large Nittai-ji temple in Kakuozan that represents friendly relations between Japan and Thailand.

Chikusa ward is considered convenient for schooling with Aichi International School served by Hoshigaoka station, and Kakuozan International Preschool also in the area. Nagoya International Japanese School is one hour from Chikusa, and Abroad International preschool and elementary schools 15 minutes away.

See listings for properties available now for rent in Chikusa Ku on JapanHomeSearch.com by clicking this link (it will return only Chikusa Ku results), or browse the Nagoya Housing Cost Survey data below, which will give you a snap shot of what sort of expat housing is available in the area.