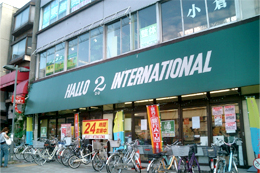 This is a popular area for expats due to the large selection of western-style houses with gardens. Issha and Hongo stations are especially favored by expat families as they are located for good access to The Nagoya International School, downtown Nagoya and other places such as Toyota City.

There are several major shopping centers, a good number of sports facilities and some of the nicest parks in the city. While the nightlife is more subdued there is a wide selection of restaurants and cafes to choose from. Additionally, there is a good selection of English-speaking physicians and pediatricians located in the area.

Both Issha and Hongo Stations in Meito Ku are especially popular locations. Living near them opens up access to the Higashiyama Subway Line, making commuting into the city relatively quick and easy at about 20 – 25 minutes.

The entrance to the Tomei Expressway located at Hongo and the Meinikan Expressway at Kamiyashiro provide excellent vehicle access to the west for Ichinomiya, Kyoto and Osaka, as well as to the east for Toyota, Okazaki and Tokyo, and the Chubu Centrair International Airport.

Being on the extremities of the city boundaries brings the obvious advantage of having bountiful green areas and parks. On the western side nearest to Hongo is Idaka Ryokuchi Park. This park was designed with Japanese tradition in mind, and as such bamboo forests, ponds and a petting zoo remain as well as the usual open space and play areas. In the south is Makinogaike Greens that has a pond, child play area and a large golf course.

It is connected to the south with Tenpaku Park whose barbecue area draws many families on weekends, a large lake, streams, lawns and play areas. To the north of Hongo, near Meito police station, is the smaller Meitoku Park, and in the east is one of the city’s best cherry blossom viewing spots, the aptly named Heiwa Park (Peace Park). Another nice place for cherry blossom is along the Kanare River that runs through Meito-ku

The subway into the shopping district of Sakae from Issha is a mere 17 minutes, meaning that city center shopping is never far away. Closer to home is the upscale shopping areas of Hoshigaoka Terrace and Matsuzakaya, both of which have a decidedly Western feel and are popular with the trendsetting and affluent locals. For mall shopping, the Chikusa Aeon is just 15 minutes away.

While there is not so much choice as you would find in areas closer to the city centre, eating out in Meito-ku is as eclectic as you can imagine for an area that is popular with ex-pats. There is a great BBQ and Craft Beer place as well as one of the very few vegan restaurants in town. There is various international cuisine on hand including French, Indian and Belgian, as well as traditional Japanese.

While there are a few cafes, bars and bistros in Meito-ku, there is very little nightlife in the area. However, should you wish to hit the town, Sakae is just a short ride along the Higashiyama subway line.

For those who like ‘a good walk spoiled’, Meito-ku is the home of the Aichi Country Club, a short but challenging golf course in the south of the ward. On its western border lies the Higashiyama Zoo and Botanical Gardens, a popular spot for families, couples and kids of all ages.

From Hongo or Issha, Nagoya International School is an hour away on public transport, but just a 25 minute drive, but Aichi International school is much closer, being just 15 minutes on the subway or 10 minutes in the car. For those with young children Abroad International is about 25 minutes whether you drive or take the subway.

See listings for properties available now for rent in Meito Ku on JapanHomeSearch.com by clicking this link (it will return only Meito-ku results), or browse the Nagoya Housing Cost Survey data below, which will give you a snap shot of what sort of expat housing is available in the area.