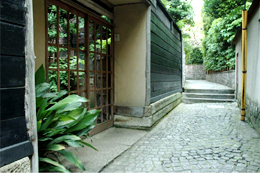 Chiyoda-ku is home, tucked away and hidden by high walls and moats, to the Imperial Palace. These areas tend to be favorites with the European community, especially the French, due to the close proximity to the French school. Shopkeepers generally will not speak any English and so getting by can be a little more difficult here than in other areas. Availability of housing is somewhat limited, however with the right timing, large expat style apartments can be found in the areas if Iidabashi and Ichigaya.

Chiyoda ward is very well connected with the central Tokyo Station found to the east of the ward connecting the area to the rest of the country.

There are some 17 train and subway lines that run throughout the area as well as the Okyadu Express Romance Car that links the city with the popular holiday spots of Hakone, Enoshima and Kamakura..

Chidoya Ward is blessed with such an abundance of greenery that it covers around one-third of the area. The largest park in the ward is the Tokyo Imperial Palace grounds that dominates the area with its expansive gardens. To the north is the Kitanomaru Park, which is the location of the Nippon Budokan, the Science Museum and the National Museum of Modern Art, Tokyo. Chidorigafuchi Moat Path includes a waterway and is a popular location for enjoying the cherry blossom in the spring, and Hibiya Park, Japan’s first western-style park, includes restaurants, open-air concert halls, and tennis courts.

Kitte Marunouchi is a shopping, dining and cultural centre within the grand post office building that was built in 1933. It occupies one underground floor and the first six floors of the 38-floor JP (“Japan Post”) Tower. Hibiya Changer is another large shopping mall that also houses a live theater and a movie theater.
The area of Akihabara, or “Akiba,” is world famous for computer-related, electronics, and home appliance stores and is packed with shops selling everything in electronics and anime/manga culture from exclusive high-end goods to virtual trash.

Being central Tokyo, Chiyoda Ward has an absolute abundance of dining opportunities. From local standing bars to high end international cuisine, no matter what you are looking for, you are bound to find it here.

The area of Yurakucho has some nice bars and restaurants, and Akihabara is where the famous idol group AKB48 perform nightly. Just outside of Chiyod-ku, on the east of Hibiya, you can find Ginza, which is Tokyo’s most famous entertainment district with numerous department stores, boutiques, art galleries, restaurants, night clubs and cafes.

Tourists flock to Chiyoda-ku each year for many purposes, but perhaps the main reason is the Imperial Palace, the primary residence of the Emperor of Japan. The National Diet Building in Nagatacho, the Japanese houses of parliament, is also in the area, making the Chiyoda ward the political capital of the country.
Just to the north of the palace grounds is the Nippon Budokan indoor arena that holds concerts and famous for the “Live at the Budokan” albums, including those of The Beatles, Bob Dylan, and Ozzy Osbourne. In the north of the ward you can find Yasukuni shrine, a Shinto place of worship that ids infamous for its connection to the Japanese war effort.
The Kanda Matsuri, held in May anually, is one of Tokyo’s three most famous festivals.

British School in Tokyo is just 20 minutes away from Ichigaya Station, whereas the American School in Japan is a bit further at about fifty minutes.

Chiyoda-Ku offers a wide selection of options for dining and entertainment.  You can see some of this variety using the map below.

See listings for properties available now for rent in Chiyoda-Ku on JapanHomeSearch.com by clicking this link (it will return only Chiyoda-ku results), or browse the Tokyo Housing Cost Survey data below, which will give you a snap shot of what sort of expat housing is available in the area.