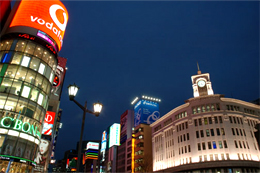 Meaning ‘central ward’, Chuo-ku, quite literally, the heart of Tokyo. The area is densely packed with a high concentration of businesses, offices and retail space, seeing hundreds and thousands of workers flock to the area every day, with yet more arriving in the evening to enjoy its abundant nightlife. Availability of housing in the popular area of Ginza is understandably limited due to the high price of land.
Recently the availability of newer Japanese style housing around the Tsukiji area is on the increase, however larger western style housing continues to be scarce.

As befitting the central area of Tokyo, Chuo ward is very well connected, and on its western border you can find Tokyo Station, which has six Bullet Train lines, seven ordinary railway lines, and one subway lines.

As to be expected of such a commerce and entertainment dominated district where land prices are at a premium, there is not a whole lot of green space in Chuo-ku. However, near Tsukiji, alongside Tokyo Bay, is Hama Rikyu Gardens, a large attractive traditionally themed landscape garden. Originally the residence and duck hunting grounds for a feudal lord during the Edo period, it features seawater ponds and a teahouse on an island. To the north of the ward there is Nihonbashi Hamacho park that has a play area for children.

Ginza has been popular with middle-aged Japanese women for decades and is one of the most exclusive and expensive shopping areas in Japan. Popular department stores include Mitsukoshi Department Store, Ginza Six, Matsuya Department Store, Wako Department Store and Tokyu Plaza Ginza. Of particular interest is Dover Street Market Ginza, which houses more than 50 domestic and international apparel brands, ranging from luxurious to casual styles – and thus not really living up to its name – and Elttob Tep, home to the world famous Japanese designer Issey Miyake.

Ginza isn’t just popular for shopping, but it is also well known for its many dining options. Of course there are many high end, upscale restaurants, but thanks to the large number of office staff working in the area, you can also find plenty of izakayas, the Japanese-style restaurant bars.

After a day of shopping or work followed by dinner, Ginza is the place to go out and have fun. A blaze with neon lights, with bars, nightclubs and countless hostess bars, it is one of the many areas where Tokyoites come to play. For a more cultural evening out you can experience Kabuki at the beautiful Kabuki-za Theatre.

Tsukiji, home to Asia’s largest fish market handling over 2,000 tons of marine products per day, is viewed as one of the best sushi destinations in the world and is a must visit area for tourists. It is also home to the Jōdo Shinshū temple of Tsukiji Hongan-ji.
One of Japan’s “Important Cultural Properties,” the current incarnation of the Nihonbashi Bridge has stood for more than 100 years.  First constructed in 1603, and the one that stands today is the 19th incarnation, rebuilt in the same spot as the original.

The Bridgestone Museum of Art, with collections including Impressionists, Post-Impressionists and twentieth-century art by Japanese, European and American artists, as well as ceramic works from Ancient Greece was opened in 1952. It is currently under reconstruction and will reopen in 2019.

British School in Tokyo is just 25 minutes away from Ginza Station, whereas the American School in Japan is a fair bit further at over an hour.

Chuo-ku offers a wide selection of options for dining and entertainment.  You can see some of this variety using the map below.

See listings for properties available now for rent in Chiyoda-Ku on JapanHomeSearch.com by clicking this link (it will return only Chuo-ku results), or browse the Tokyo Housing Cost Survey data below, which will give you a snap shot of what sort of expat housing is available in the area.